Back to all News

When Sadiyo Hassan steps onto the stage at TEDx Fargo on July 26, she’ll share a story about transformation.

This 2018 graduate of West Fargo High School will talk about the need for transformational change in the tools used by law enforcement. She’ll speak about how connections can transform a community and empower others to be more successful.

Hassan understands this well because transformation is her story.

In 2005, she moved from Nairobi, Kenya, to North Dakota as a refugee, along with her mother and five siblings – all of Somali heritage.

Now, Hassan is the valedictorian of her graduating class of nearly 300 people, this year’s Startup Weekend winner, and the founder of a technology company. She credits these successes to the support she has received from the Fargo community.

“It’s surreal,” Hassan said, describing her transformative journey. “Mine is just one of hundreds of lives affected by the involvement of the community. It changed my life. I can’t express enough how amazing the community members and the businesses are in Fargo. Without them, I would not be where I am today, nor would I have found my passion.”

An early step in Hassan’s journey was when she attended the Health Tech and Trade Expo as a 9th grader. She was drawn to a robot, which led to a 30-minute conversation with Lee Johnson, who works with the STEM Alliance in addition to his role at John Deere. 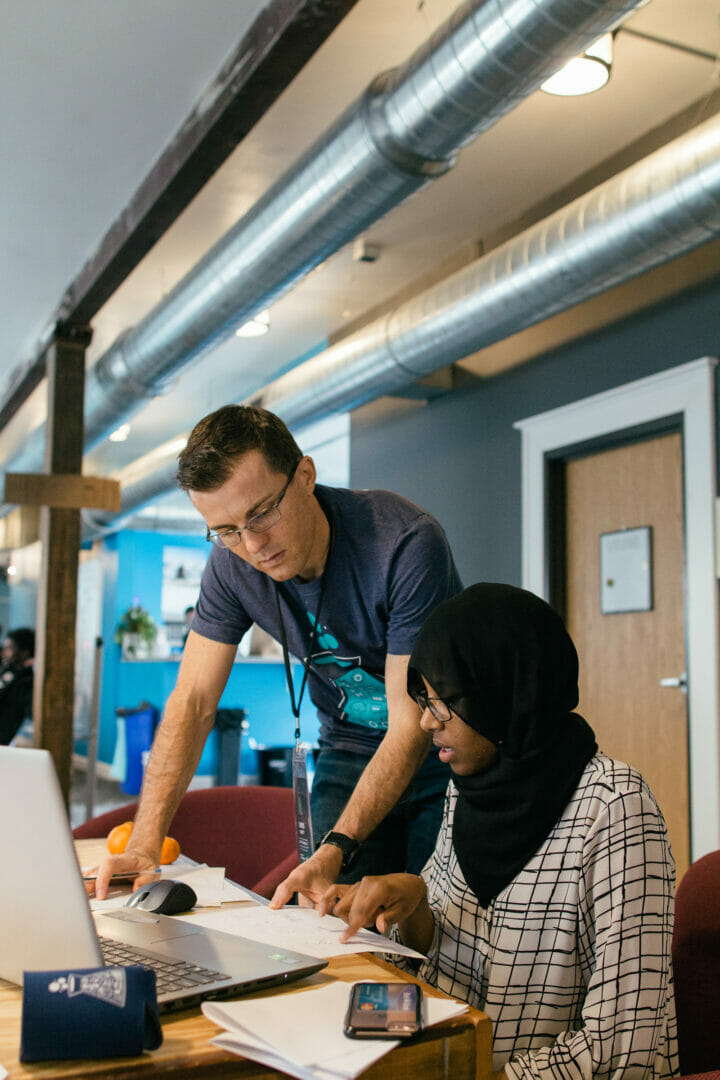 “I was just surprised a ninth grader who was born in Africa was so interested in something like robotics, and I didn’t know if I would see her again,” Johnson said.

Johnson did see her again. In fact, he said, they became dear friends. Her conversation with Johnson led her to join the Robotics Club, where Chris Garty, a program manager at Microsoft, became her mentor.

Hassan stood out right away, Garty said. “She can be fearless. She just gets things done. It doesn’t matter if she’s a girl, if she’s Muslim, etc. She’s a rock star.”

“When she started, she had a lot of interest, but frankly very few hands-on skills. We were building something, and I asked her to grab a wrench and she asked what a wrench was. The first time she picked up a drill, she wasn’t sure how to hold it,” he said. “Within a few days, she was proficient with both. Those were simple tools compared to some of the advanced skills that she has developed like running a lathe, designing in 3D CAD, programming, etc.”

Throughout Hassan’s high school career, Johnson and Garty saw her talent grow and her hard work translate into success.

For example, Hassan was selected for John Deere’s Early Talent Program, a special summer internship for highly talented students coming out of the John Deere Inspire robotics team. She’s now in her second year of that program.

“She was a rock star last summer, and we had departments asking to have her in their area for this summer,” Johnson said.

A Business Idea Was Born

One day in high school, Hassan heard a presentation by the West Fargo Police about the Child Abduction Response Team, a coalition of law enforcement officers and other emergency responders who work together whenever a child goes missing. They wanted to more effectively coordinate their resources and were looking for some tech help.

Hassan decided to develop a software solution and she worked on this idea in her Robotics Club. The mobile app and its online administrative view would track responders in the field, help them collaborate better, and enable leads to be routed to the closest resource – saving time in critical situations.

“When emergency responders from multiple jurisdictions and states work together to find a missing child, it’s difficult for them to communicate,” Hassan explained. “This helps make their jobs more efficient, so they don’t have to waste time. For example, in the 40 minutes it takes to get back to the station, the abductor could be halfway to Grand Forks.”

As her mentor in Robotics Club, Garty guided her by asking questions and keeping her rooted in the main problem she was trying to solve.

In April, when Garty saw that the theme of this year’s Techstars Startup Weekend Fargo was “community,” he thought Hassan’s rapid-response project was a great fit. Her involvement was last-minute:  Garty told her about it and convinced her to join two days before the event, and she registered the day before the event. That Friday, she joined him on stage, although Garty pitched her idea.

“When she entered Startup Weekend, she was tentative,” since she was the youngest person there, Garty said. “Others were more experienced – college students and professionals.”

However, once Hassan’s idea was voted one of the top five ideas for the weekend, she came into her own, he said.

By Sunday, she delivered the final presentation, along with fellow team member Nicole Mattson… and her idea won!

New Paths on the Journey

Hassan and her team have now registered her business, Rising Tide Software, with the North Dakota Secretary of State and they are planning to help even more communities. Hassan presented her project at One Million Cups recently as well.

“Startup Weekend is an incredible experience that has changed my future and my view of my community,” she said. “If I didn’t go through this experience, I would not have seen how amazing Fargo is.”

The experience also impacted her college choice. She originally planned to attend the South Dakota School of Mines and Technology, but after the win, Hassan switched to North Dakota State University so she will be closer to her start-up business. She plans to study computer engineering and business administration. Her talent and hard work earned her a Gates Foundation Scholarship, which gives a full-ride scholarship for up to five years. This is awarded to just a few hundred students 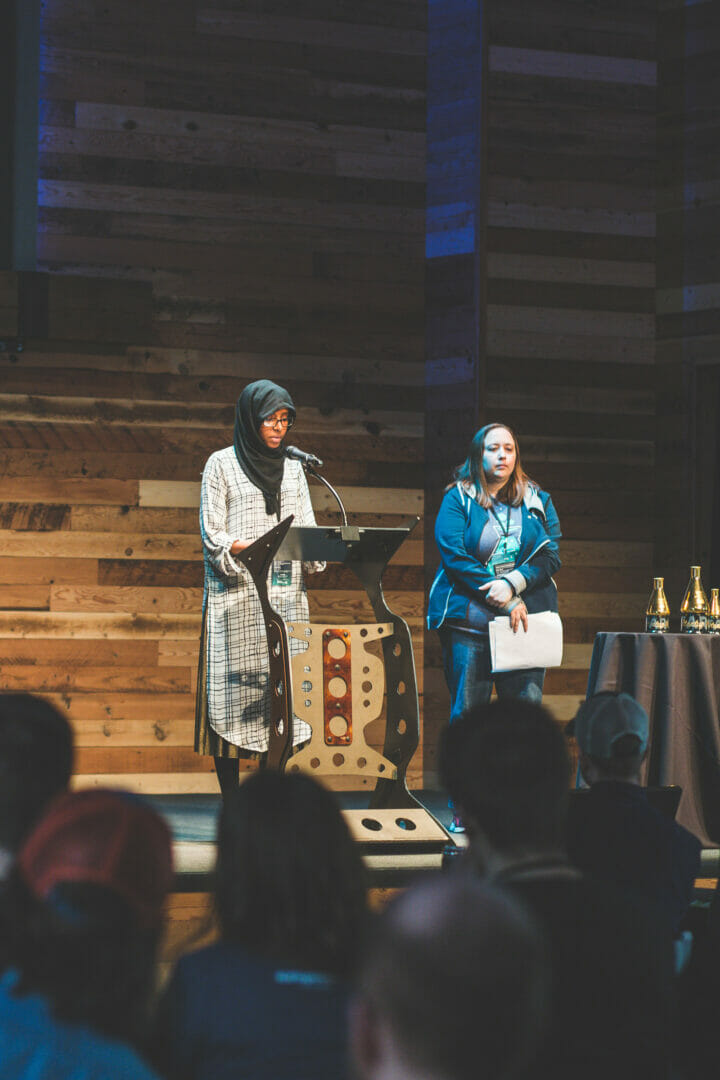 out of thousands of applicants.

“Three months ago, I wanted to go as far away as possible,” she said. “I’m glad I’m staying in Fargo and it’s all because of the opportunity Fargo provides. I’ll be staying here for a really long time. I want others to see what I’m seeing, and I want to create that sort of experience for others, especially fellow students like myself.”

“The whole process of Startup Weekend opened her eyes to what’s possible,” Garty said. “She learned that networks are really important and that what’s possible is really only limited to her ideas. She didn’t know how great the community is and how many opportunities there are.”

Investing in our Future

Success stories like Hassan’s are exactly why the Greater Fargo Moorhead Economic Development Corp invests in efforts like Heath Tech and Trade Expo, Startup Weekend, STEM Alliance of Fargo Moorhead and other efforts that promote STEM and support entrepreneurs. The EDC also serves as the fiscal agent for the STEM Alliance of Fargo Moorhead, so John Deere and Microsoft employees have their volunteer time matched with dollars from their organizations. This support helps even more young people build STEM skills.

“The EDC works to continually provide opportunities for people to get together, meet each other and promote innovation,” said John Machacek, SVP for Finance & Entrepreneurial Development at the EDC. “We also tell the story about why Fargo-Moorhead is a great place to live, work and create.”

Garty echoed how Startup Weekend and TEDx help introduce people to what’s possible in Fargo. “You don’t have to be in Silicon Valley or New York to do world-changing work,” he said.

Hassan hopes others are inspired by her story of transformation. “It doesn’t matter if you’re a female, a refugee or a minority. Success isn’t defined by your race, gender, background or age.” But, she adds, “It’s not just my story; it’s Fargo’s story of success. That’s the kind of community Fargo is. It takes a village, and that kind of support is hard to find.”

Modernizing Education: How Career Academies Are Helping Our Workforce

Reporting Success, the GFMEDC Annual Report is out!